Gallium Nitride (GaN), is one of the most promising materials in compound semiconductors. This material has high electron mobility and a wide band-gap, and it is currently being developed in a variety of applications. One example is the High Brightness Light Emitting Diode (HB LED) device. GaN-based HB LEDs have already been used in consumer electronics such as displays and lighting.
Another application of GaN is the next-generation power device.  It is known that high-concentration two dimensional electron gas (2DEG) are generated at the AlGaN/GaN heterointerface, and the 2DEG has high electron mobility (1500cm²/Vs). Due to the high electrical breakdown strength of GaN (ten times that of Silicon) and the high-concentration 2DEG at the heterointerface, AlGaN/GaN power devices can achieve a high breakdown voltage, high-speed switching and low on-resistance compared to traditional Silicon based power devices. Therefore, the GaN based power devices are expected to be widely used in power generators, trains and electric vehicles.

One of the challenges in GaN power device fabrication is to achieve a “normally off” operation. While AlGaN/GaN High Electron Mobility Transistors (HEMT) devices are generally “normally on” and require a circuit to turn off the devices, a normally-off operation is preferred for safety concerns. Multiple device structures have been investigated by researchers and device manufactures in an effort to achieve the “normally off” state. One example is the planar gate AlGaN/GaN HEMT. Another structure is the camel gate AlGaN/GaN HEMT.

There are some challenges in the fabrication of the planar gate structure using plasma etching.

The native oxide layer on the AlGaN surface prevents the recess etching by 30 to 120 seconds, and it causes offset time. Using high RF power can reduce the etching offset, but it makes it difficult to reproducibly control the remaining thickness of AlGaN and also can result in device damage.

2. Precise and reproducible thickness control of the AlGaN layer

AlGaN thickness control is required for proper formation of a recessed-gate structure. The remaining AlGaN thickness determines the Vg-Id characteristics, and it is critical for reducing drain current.

Also, there are some challenges on the fabrication of a planar gate structure using plasma etching.

4. Etch selectivity of GaN over AlGaN 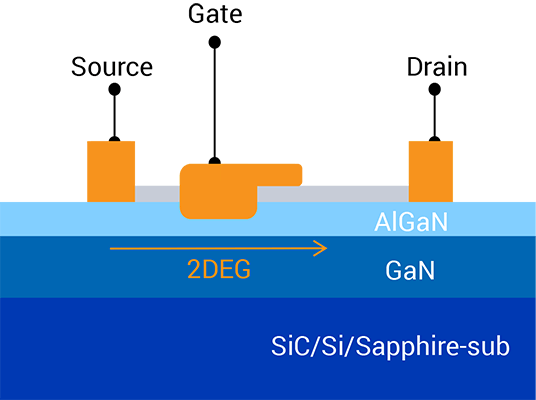 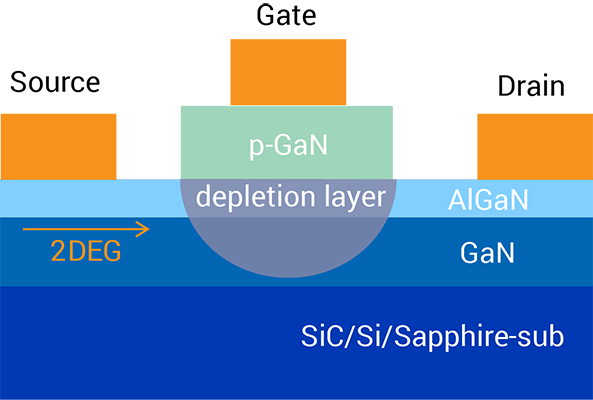 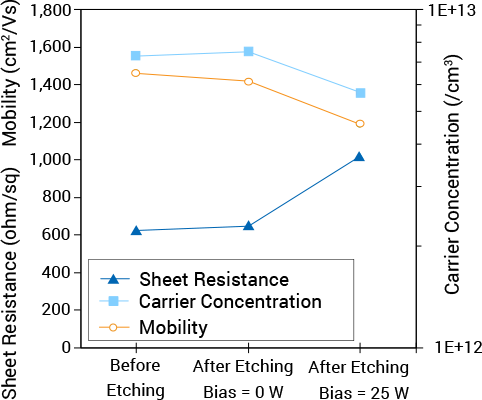 Samco solved the selectivity issue by using a small flow of an additive gas (“Gas X”) in a chlorine-based gas plasma mixture. An etch selectivity of 60:1 (GaN/AlGaN) is achieved, and  the etch process is successfully stopped on the AlGaN interface without over-etching. Additionally, the plasma damage on the AlGaN layer is reduced by employing lower RF bias power. 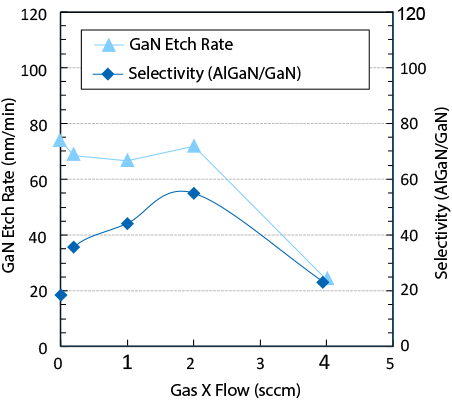 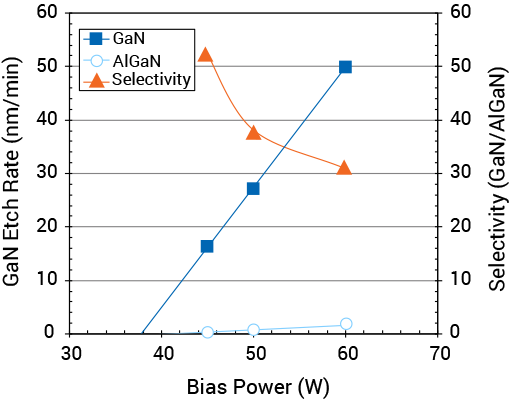 The Value of Samco’s Processes

Achievement of “normally off” operation

Samco’s processes have contributed to the development of high-performance GaN power devices.

Turn-key solutions for the device production

Contact us for more detail.
2021 Samco Inc. All Rights Reserved.